HomeNewsEngineering students discover more at construction site with Dickensian past

Engineering students discover more at construction site with Dickensian past 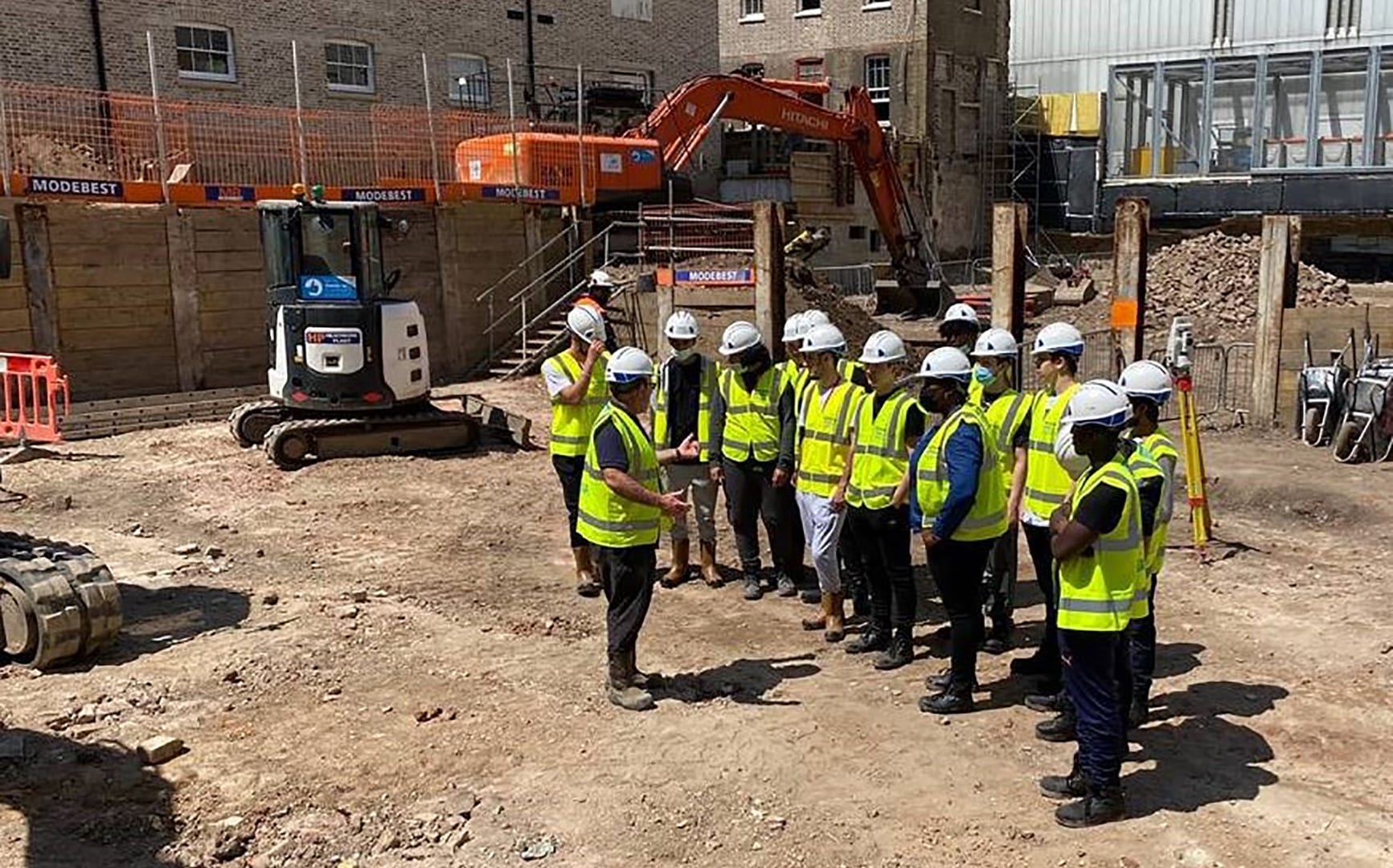 Engineering students at CANDI discovered more about groundworks and archaeology being undertaken at a construction site in central London.

Thirteen students visited the Middlesex Hospital Annexe site in Cleveland Street, Camden, which is being redeveloped by the University College London Hospital Charity.

The Grade II-listed building is a former workhouse dating back to the late 18th Century, one of only three remaining in London, with the remains of a former cemetery at the rear.

Charles Dickens lived in Cleveland Street as a child and later as a teenager, and it is thought the workhouse may have been the inspiration for Oliver Twist.

Morgan Sindall Construction and Ark Build PLC are converting the building and constructing a new block on the cemetery site to create a mix of healthcare, commercial and residential properties including social housing.

Archaeologists from Iceni Projects and L-P: Archaeology have uncovered extensive structural remains of the former workhouse and its inhabitants buried in the cemetery.

Morgan Sindall Construction is currently preparing the site and overseeing the safe excavation of around 1,000 burials before work commences on the new development.

They explained why an archaeological excavation had to be done before any construction started and the considerations that needed to be made when working on the site.

The students learnt some of technical language used in the industry and saw the temporary works in place as well as some of the ground preparation and piling being undertaken.

They then had the opportunity to ask them questions about the work and their careers.

Engineering student Joni Salillari, 18, from Haringey, said: “I’ve been on building sites before, but never one with skeletal remains. It gave me a deeper insight into the field and how there is much more to it than just putting up a building, and how they have to look at the history behind a site before they start any work.

“Trips like this are really important because they’re very interactive and can teach you things you might not learn in the classroom.”

Another student, Nikolas Vasilev, 17, from Haringey, said: “It was interesting to see how many different people work on a building site, like archaeologists to prepare the site and remove the remains. That was something that had never crossed my mind.

“We got to hear what they do on a day-to-day basis, which is really useful to know. It gives you a taste of what you are getting into, or if you’re unsure it gets you thinking about different aspects and the types of jobs you might want to do.”

The Middlesex Hospital Annexe was built in the 1770s as Covent Garden Workhouse to provide food and shelter for impoverished parishioners of St Paul’s Church.

It later became the Strand Union Workhouse and the Central London Sick Asylum before being acquired by the hospital and falling under the NHS.

The building was closed to the public and was vacated in 2005.

Chi-Chi Akutu, Work Placement Officer at CANDI, said: “This was a fantastic opportunity for our students to see first-hand the ground works and archaeology being undertaken at an actual construction site and find out more from experts in their field.

“Paul and Stephen shared their wealth of knowledge and experience on all aspects of preparing sites for development, project management, health and safety, environmental issue and logistics management. They also revealed how they started on their jobs and what career pathways there are in archaeology, construction and engineering.”