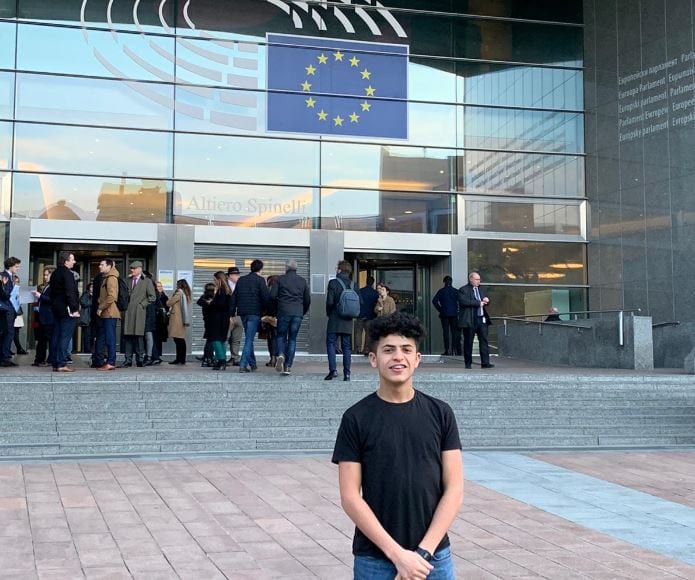 In January, City and Islington Sixth Form College student Muhammad Mahmoud was selected as part of a national educational programme to attend the European Parliament in Brussels.

The Young Visitor’s Programme is a week-long trip to the European Parliament in Brussels designed to teach students about the EU. It’s hosted by Renew Europe and offers 20 spaces for UK students to experience first-hand the inner-workings of the European Union.

City and Islington College was proud to secure a space on the programme for Muhammad, who is  studying A Level Geography, Politics and Economics. His  outstanding application for the programme saw him selected to travel between 27 and 31 January.

“Being able to visit the EU parliament, speak to NGOs like the World Wildlife Fund (WWF) and businesses like Facebook, and to discuss work with MEPs,  was a one in a lifetime opportunity”, said Mohammad. “It allowed me to apply my classroom knowledge in the real world and, for that, I am forever grateful to City and Islington College, Renew Europe and the European Union.”

Muhammad is planning to read Geography at university, and applied to the programme to develop his understanding of the EU’s function. Returning from Brussels, he told the college that he was pleased to have a deeper and more balanced understanding of the intricacy of the Union and its role in world politics.

“After attending a few events and lectures at the London School of Economics’ (LSE) European Institute, I was ever so eager to learn more about the EU and understand its role in the world today. I wrote articles that commentate on these lectures and events to inspire other young people to become politically aware.

“Attending lectures at universities only provides so much input, however. The opportunity to visit the European Parliament further helped develop my understanding of such an important global body.

“I was always aware of the EU’s influence, but I didn’t know the full magnitude of that influence.”

Muhammad described the trip as an “emotional time”, coinciding with the country’s formal decision to leave the EU on 31 January. Having shared a lift with Nigel Farage and spoken extensively to MEPs about their various roles, Muhammad concluded his visit, saying: “I believe that by working together, we achieve greater success. My visit taught me how the 28 – now 27 – countries worked together to achieve the EU’s objectives.

“Seeing the UK depart from the EU first-hand was a touching moment.”

The Renew Europe Group is a pro-European political group of the European Parliament. While City and Islington College is an unaffiliated and non-political institution, we believe it is important students have the opportunity of diverse experiences relevant to their courses.